Got points? Now is the time to redeem them.

You may also get a 20x the points personal offer to use instead of the redemption if you are planning on saving your points. 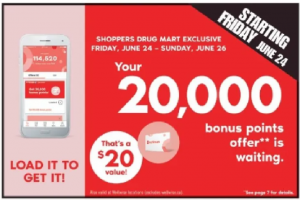 Shoppers Drug Mart Corporation is a Canadian retail pharmacy chain based in Toronto, Ontario. It has more than 1,300 stores operating under the name Shoppers Drug Mart in nine provinces and two territories, and as Pharmaprix in Quebec.

The company was founded by pharmacist Murray Koffler in 1962; the Koffler family still retains ownership of the Super-Pharm pharmacy, which has locations in Israel, Poland, and formerly in China (as Ensure from 2005 to 2011). Super-Pharm’s logo is similar to that of Shoppers Drug Mart, which was created by the artist Sylvain Liu. It also uses some of the same private-label brands, such as Life Brand and Quo.

I am a mother of 4 children. Life is expensive! I am happy to help other canadian mothers like me to save money

We will be happy to see your thoughts

Sampler: Receive your FREE samples (Degree, All-Purpose In The Raw)